London From Above: The Sky Garden vs The Shard

In London, there are many possibilities to get an overview of the city – two of them being The Sky Garden and The Shard. Because they are only a bridge away from each other, the view is not that different. The majority of famous sights, such as the London Eye, Tower Bridge and St. Paul’s Cathedral, are well-visible from both.

Although I’ve visited the capital city of the UK more times than I can count on fingers of both hands, I had never seen it from an observation deck before last November. When planning our trip last autumn, I was not quite sure what to expect from either the Sky Garden or the Shard. There were so many questions racing around in my head. Tripadvisor community seemed to cheer loudly for the Sky Garden, while photos looked more convincing from the Shard. So we did both. 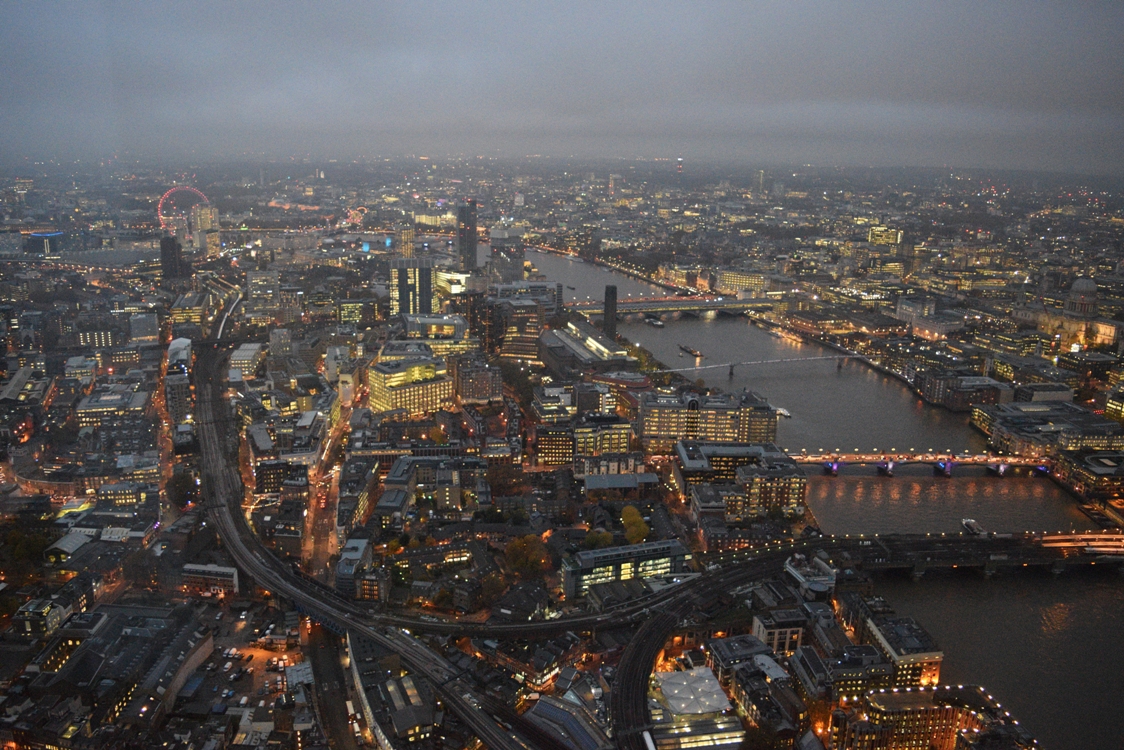 The Shard viewing platform is the highest in London at almost twice the height of any other in the capital. To get there, you have to pay the admission (students £20.95, adults £25.95 when booked online).

The first thing I noticed when reaching the top, was that it wasn’t heaving with visitors. The deck was almost empty. I suppose this could be because apart from spectacular 360-degree view, there’s nothing to keep you entertained. You have nowhere to sit, even the bar had no benches or seats! All you can do is walk around and take photographs. I discovered the best views are from the 72nd floor – however, note that it’s in open air. What does this mean? You can feel the breeze, but you can also feel the rain when being too close to the glass. Keep in mind rainfall is fairly regular in London. I was so busy photographing, I didn’t even realise I had been kneeling on wet artificial grass for the past few minutes. Not the best feeling, when it’s freezing outside. My last negative comment is on the difficulty of taking a good photo. Unfortunately, the angle of the glass and pillars make the process of obtaining a clear photo very challenging with no reflection (I’m fairly certain the project’s architect is not an Instagram user). You need to get a bit more creative, but it’s not impossible. 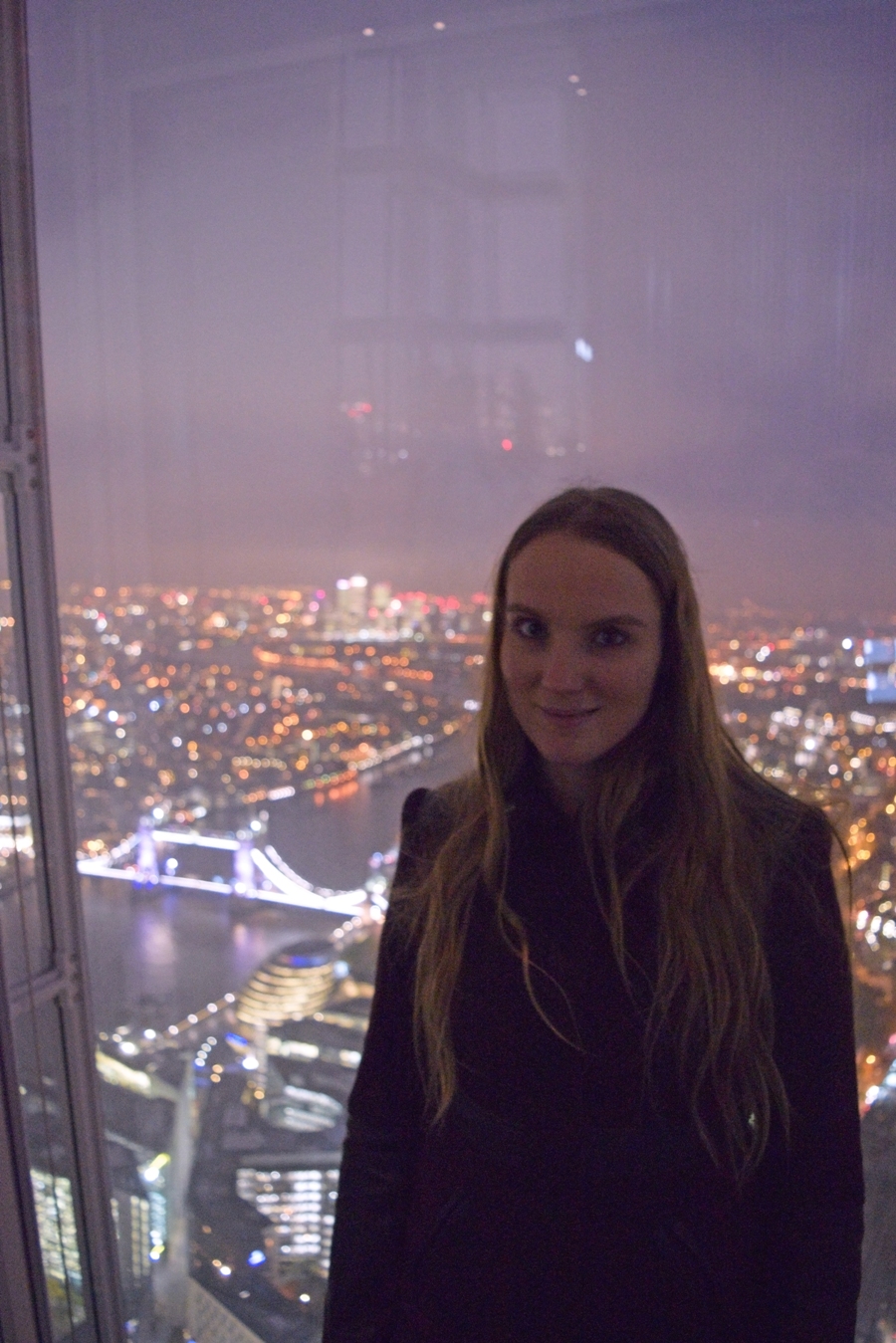 Even with all the cons, I believe this is by far the best view you can see in London. Since you’re allowed to spend an unlimited time on top, I advise you to book a ticket for one hour before the sunset to get the daylight view and later the night view. It looks twice as magical once the neon lights are on, I swear. And if you’re lucky enough, you might even be able to capture the red sky before it turns dark! 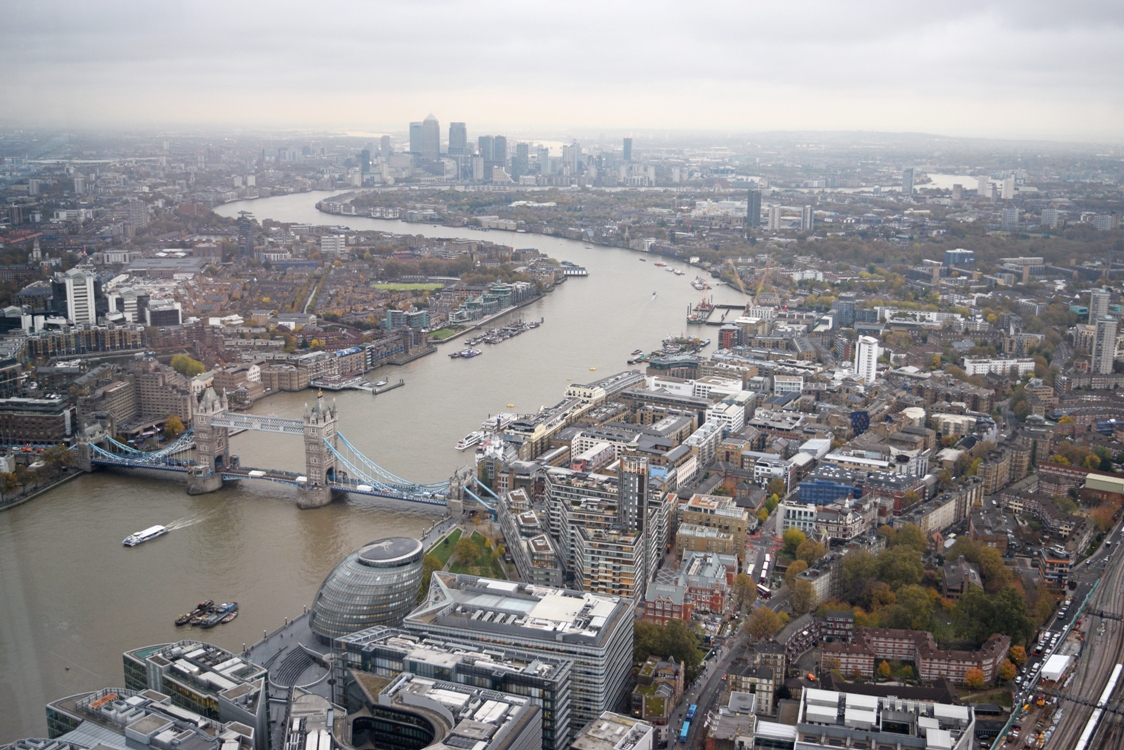 Last but not least … This tip may sound weird but nobody mentioned that to me and I can’t let you miss it: while at the Shard, stop by the loo on level 68. If not for else, just to see the design (floor to ceiling glass!) and the views. Apparently, there is a blind to pull down if you feel uncomfortable (thanks, internet). I never noticed. Instead, while admiring the view, I couldn’t stop picturing somebody on the opposite side with binoculars having a great view of me … 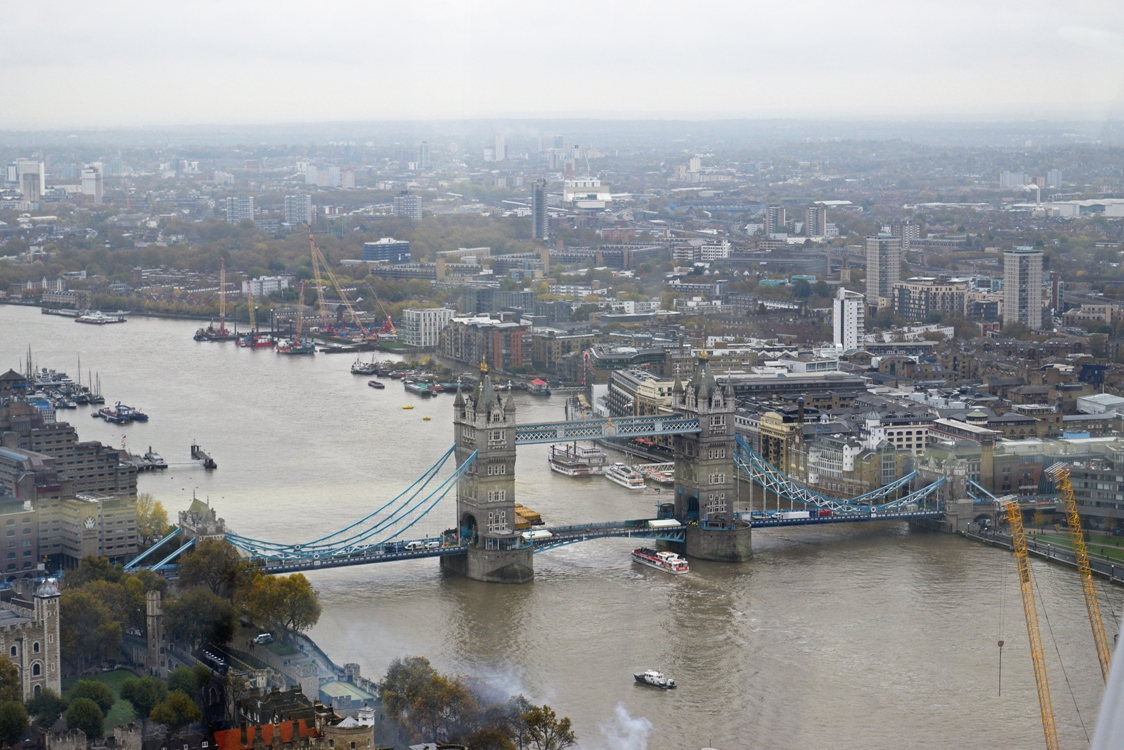 Good news first – the entry to the Sky Garden is free of charge. A big advantage, if you ask me. Free tickets must be booked in advance through their booking system and yes, they are limited. New ones are released on the third week in advance every Monday morning. Be prepared: they go quickly. I wouldn’t say the place gets too crowded (you could move around easily), but it was far from being all empty either. 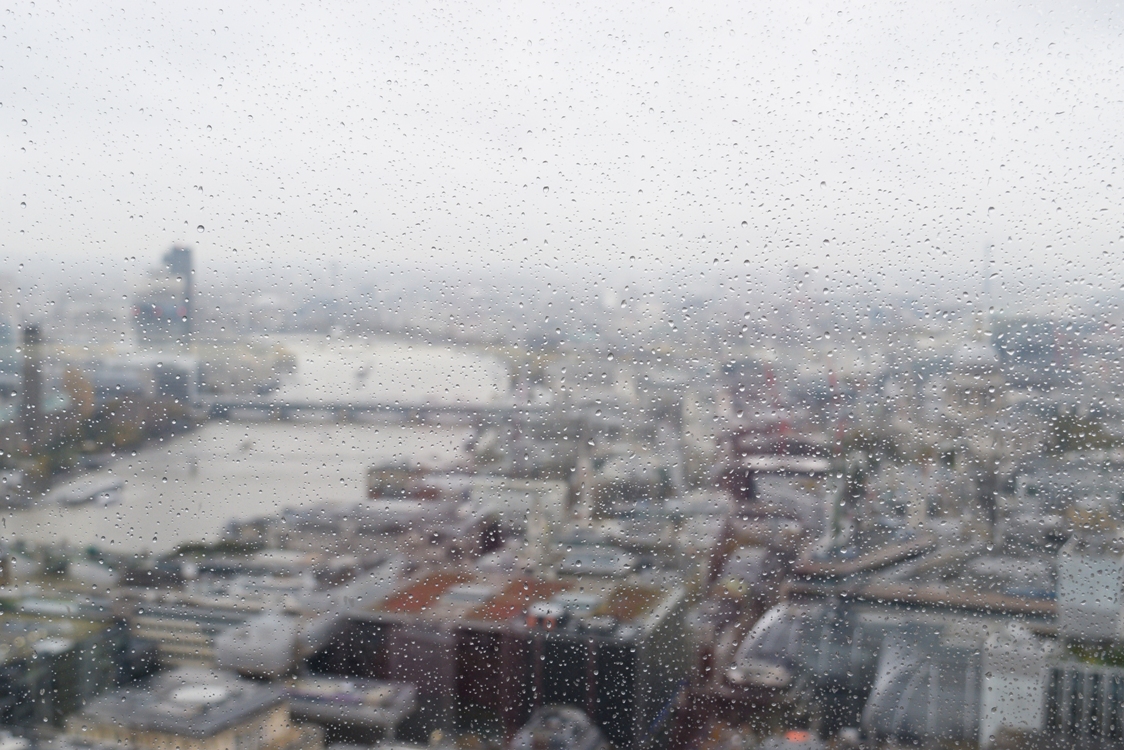 After half an hour in the queue, security check and an elevator ride, we reached the 35th floor. The downside was we were not allowed to go outside onto the balcony because of the bad weather (read: drizzle). Therefore we were limited to the covered area and that certainly topped off the visit for me. The exotic plants add a little something to the place, however I found the garden to be a bit sparse. Don’t get me wrong, the plants are nicely laid out, but in my opinion, they are nothing special. Maybe that’s just me. 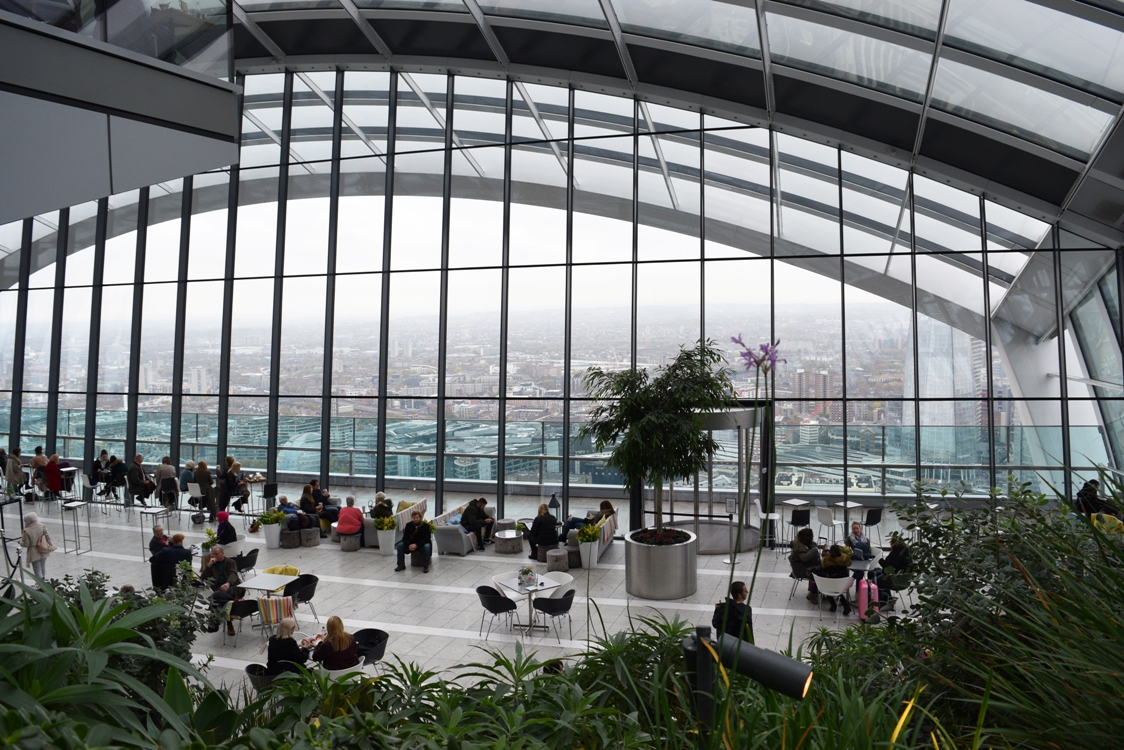 What impressed me was how many seats were available. When we were there, you could easily find a spot for a quick coffee refill. However, I am aware that our experience would most likely not have been quite the same in high season or during the weekend when it’s bursting with people. 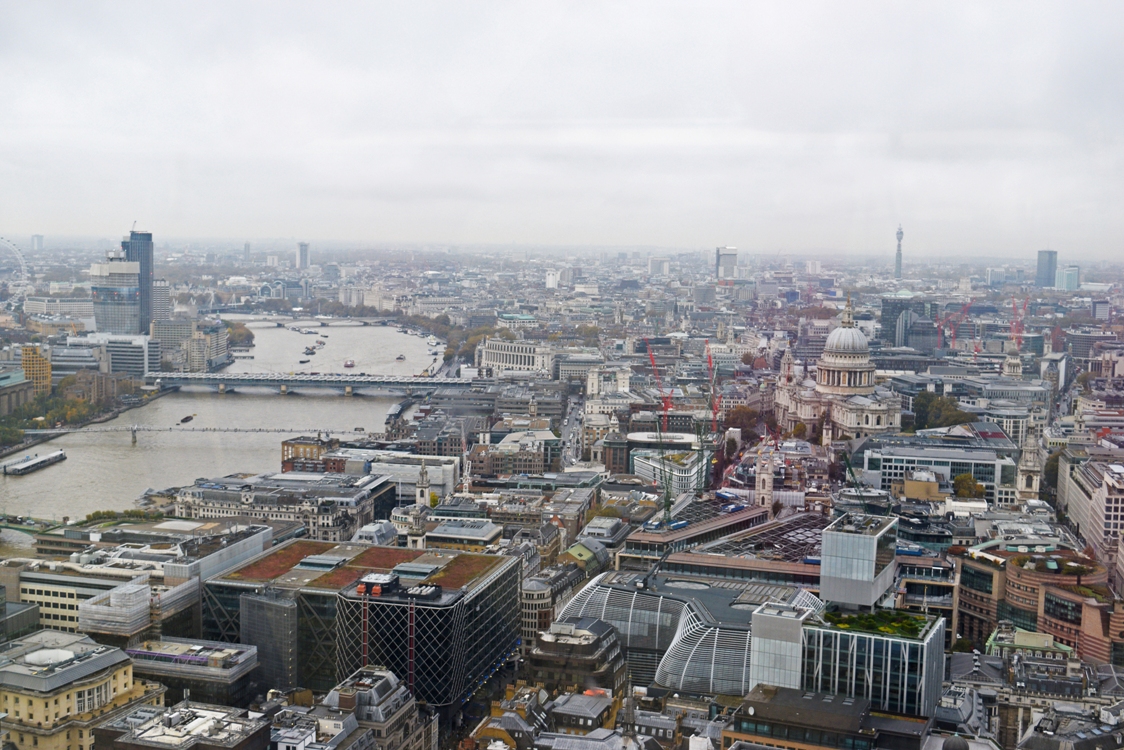 So … The Sky Garden or The Shard?

You probably started reading that hoping I’ll make the decision for you. Sorry to disappoint but I can’t do that because no answer is right. If you ask me, the Shard has a better location and when we were there, it was pleasantly empty. In summer, this may be a whole different kind of story. Unlike the Sky Garden, it’s a small space and can easily get overcrowded. The Sky Garden, however, is not far behind location-wise and it’s free. You can’t lose anything.

What I still miss in London is an open-air view from an observation deck with no glass blocking the view. Who are we kidding – the windows are always (!) full of fingerprints. If you could lean your camera lenses directly on the window, you could still get the perfect shot but that isn’t possible in either – in the Sky Garden you need extra long arms because of the fence and in Shard, it’s the angle of the glass you have to deal with.

2 thoughts on “London From Above: The Sky Garden vs The Shard”

« Spring Break in Slovenia: 3-Day Road Trip Itinerary
How Much Does One Week Road Trip in Madeira (Portugal) Cost? »